The online grocery market is a monster. A monster worth an estimated £9.8 billion in 2016. A monster that doesn’t show any signs of slowing down either – in terms of market growth or customer expectations. It continues to be the ‘place to be’ for retailers if they want to have any chance of being a true scale player.

When it comes to the UK online grocery sector, we all know who the big players are… Tesco lead in terms of market share, but the other big names are all established online. Rarely though, do we think about the other end of the spectrum. Apart from Iceland, the discounters (namely Aldi or Lidl) haven’t yet got involved – OK yes, Aldi may be dipping their toe, but it’s wine and special buys only…

A brief history of home shopping

To understand the future of home shopping, we need to consider the past…

Home shopping began in the UK in the late 1990’s. There was scepticism about the future of the market, optimistic analysts suggested it could be worth £15 billion by 2008 – not exactly close, but they could see the potential.

Tesco and Sainsbury’s began to trial their home shopping operations by fulfilling online orders from their stores. Then, in 1998, ASDA decided to begin their own home shopping operation but decided to fulfil online orders through a “dark store”, targeting customers who didn’t have easy access to an ASDA store. At the time, CEO Alan Leighton said “The only way is to have a dedicated centre because running them out of the back of a store just cannibalises sales.” From what I can tell, it didn’t last long.

Following in ASDA’s footsteps, Sainsbury’s later decided to do the same thing to build on their 32 store trial – it suffered the same fate as the original ASDA dark store.

Tesco did things a bit differently. Leahy & co. set about building the behemoth that the online business is today by servicing their online customers purely through store picking. When you think of their operation today, you think of their multiple dedicated fulfilment centres, but the first one of these didn’t actually pop up until 2009.

Other names came and went – Webvan anybody? They arrived in the UK in 1999 with a “pure-play” model developed in America. They lasted just two years, perhaps their downfall was their online only offer… The key takeaway? The amount of capital investment required was BIG – and ultimately, written off.

The reason the investment was so big was because of the model. They serviced their customers using dedicated fulfilment centres only. Substantial investment was required to develop the physical and technological assets. Established retailers required smaller investment to implement store picking into their operations and could always rely on store footfall if orders were low.

The same moment in time was important for another reason. In 2000, Ocado was born. It took 2 years for them to establish a partnership with a retailer, but what they built with Waitrose became the talking point of the middle-classes: quality Waitrose produce delivered to the doorstep! Waitrose now had an online offer and Ocado had their first customer.

The Ocado platform was built entirely in house and has been refined extensively. There wasn’t a ‘blueprint’ to follow per se, so they developed the Ocado Smart Platform, a “proprietary technology system” – now available as a white label solution for food retailers.

The last few pieces of the online grocery shopping picture we recognise today have been added in recent years. Firstly, Morrisons entered the online market using the same Ocado platform. Then, to much worry from the established players, Amazon pulled the trigger on an online grocery service.

Looking to the future of home shopping

So, what does this brief study of history tell us of the future?

I think what is important to appreciate is that all retailers have been on a journey of refinement. I think they know their customers pretty well, but they didn’t always know the best way to service them.

Today all the key players operate fairly sophisticated and slick home shopping businesses. But, they only got there though by learning from mistakes and continuing to refine their model. Morrisons are rumoured to be looking for more than their current Ocado deal offers them – they are restricted by geographical confinements and could potentially bring store picking into their operation soon. In reality, they couldn’t afford to not be in the space any longer, so in principle the Ocado deal made sense.

So, for now there’s an obvious gap… Who will be the ‘discounter’ that takes on the giants in the online fight?

We all know that when the discounters went on a physical assault, they came out on top – repeatedly! Their growth in terms of market share and customer perception in recent years is nothing short of phenomenal, but where is their online offer..?

There might be a perception that a discounter wouldn’t be able to build an online proposition to the same levels of sophistication as the bigger competitors. So what? In the which?  Supermarkets survey for customer satisfaction, Iceland came out on top.

Aldi and Lidl have both performed well from a growth perspective, but that doesn’t mean they are willing to plough substantial capital investment into developing an online offer. However, as we now know, there are ‘investment light’ (although not necessarily cheap) options available to retailers – the Ocado platform being just one example.

The biggest challenge for discounters in entering the online space? Keeping costs down in order to protect their shelf-edge prices and ultimately, their profit. There are no doubts that their customers would shop online, but they won’t accept a price hike to be able to do it. Striking the balance of low cost store operations and high cost online channels could be difficult.

And there are some other things they would need to consider…

Increasingly, we are seeing corporates acting like startups, with a nimble and agile approach to solving complex issues or challenges and involving their customers throughout. I would love to see a discount retailer approach entering the market in a similar way – starting small while thinking big, willing to fail fast and take everything they learn into the next iteration. Developing a proposition in this way unlocks value quickly and delivers a truly customer-centric offer. If you can scale this quickly, you have the magic formula for happy customers and ultimately, happier shareholders.

I do believe that in order for Aldi and Lidl to maintain their strong position and brand perception in the years to come, they will need to fully venture into the online market. Customers across all demographics are increasingly migrating to online channels – something that shows no sign of slowing down.

With the number of customers the discounters were able to capture and retained during the recession, moving online is something they will increasingly demand. Choosing to stay out of the online battle will sooner or later be the impetus for customers moving back to the traditional Big 4, especially as the ‘mobile everything’ millennial generation enter maturity.

So, who will be the first discounter to enter move their fight for market share online? Only time will tell…

Infographic: the history of home shopping 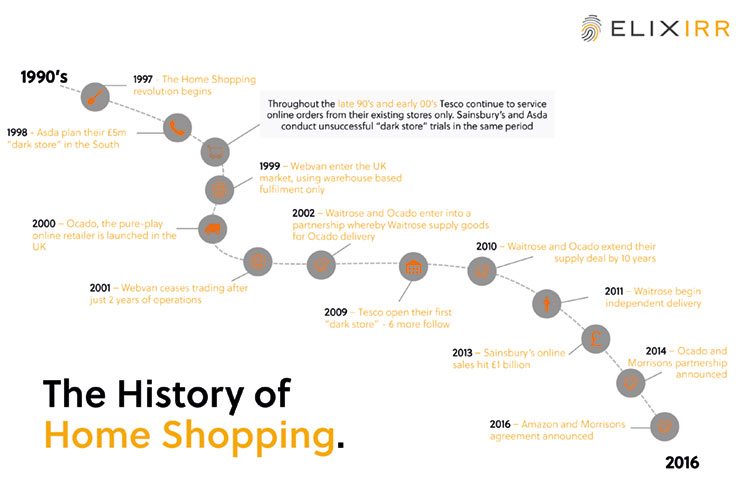