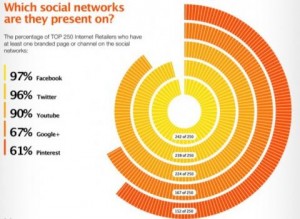 It is no longer a secret when Victoria’s Secret boasts over 18.5 million fans on its Facebook page and over 820,000 fans on Twitter. Starbucks, an earlier pioneer of social media, records just under 30 million fans and 2.5 million followers on Facebook and Twitter, respectively. In between posts and #hashtags mentioning the brand, fans find a constant flow of promotional deals while having an outlet to relay their complaints directly to the company. In fact, with over 430,000 followers to date, Twitter is now the first port of call for many customers to contact American Express. Nike, a leader in the social media space and one of the most social brands in the world, built a successful strategy around both external and internally-developed social media channels. As demonstrated by the success of Nike+, their online community for runners, Nike has cultivated active and vibrant communities across all sports categories around the world, engaging with over 50 million users. Other internally-developed social media sites such as Dell’s IdeaStorm and MyStarbucksIdea.com are increasingly proving to be rich sources of new product ideas and innovation. IdeaStorm has generated over 17,000 idea submissions and nearly 500 ideas implemented for Dell, while MyStarbucksIdea.com resulted in over 125,000 submissions and 185 ideas implemented for the global coffeehouse chain.

In an increasingly competitive industry with lowered growth and profit prospects, one thing is clear – social media is the new game changer. The unprecedented wealth of consumer data and feedback provides companies with the enhanced ability to analyse upcoming trends and to innovate. At the same time, real-time customer engagement allows firms to gain first hand product insights and to solve problems before they escalate to higher cost venues. Proactive companies can turn issues into new products or solutions that will address future problems. Social media effectively becomes both a new sales channel and the R&D “think tank”. Customer opinions can be garnered over online polls before prototype and pilot launch, resulting in flexibility and cost savings. Increased customer engagement can turn complaints into sales. Companies that understand the potential of social media will thrive.

Previously left to the periphery of an organisation’s marketing and PR arms, companies are becoming more appreciative of the central role social media plays across an organisation. While social media solutions were often left to media houses, web marketing agencies or freelancers in the past, large companies and multinationals which want a more systematic and integrated enterprise approach to data mining, analytics and customer service are now turning to the traditional providers of outsourcing services. At the same time, as BPO matures and growth in traditional areas simmers, service providers are actively searching for new ways to differentiate themselves. In response, the last 12 months saw an increased numbers of BPO service providers investing in the tools and capabilities to offer a broad range of social media management services, from social media monitoring to business intelligence and actioning customer response.

But the new game is played in a wider arena. Social media is no longer just a marketing or PR concern – it impacts an increasing number of business areas – including R&D, sales, marketing, customer service, communications and IT. Consequently, social media management in large organisations requires a more sophisticated sourcing strategy to ensure goals and activities are aligned across business functions which have conventionally implemented silo-ed social media initiatives. An effective social media sourcing strategy helps to integrate platforms, reporting tools, systems and processes with the wider company operations. The lack of an integrated approach to social media management results in systems that don’t communicate, leaving more room for error and the unnecessary duplication of customer data. Importantly, business functions must be aligned to ensure that the relevant teams have received sufficient support and training to be able to create value from the recently established social media capability. This necessitates a well-defined cross-functional governance structure to clarify roles and responsibilities, objectives, strategies, standards and processes.

The recent social media phenomenon may have left companies unprepared with the necessary budgets, governance structures or expertise to successfully build and implement a social media strategy in-house. Outsourcing components of social media to a BPO service provider can prove to be a more cost-effective, flexible and quicker approach. Through an end-to-end managed service, companies do not need to make large upfront capital investments in systems and in setting up and building teams. They will also have the assurance that they will be using current technology as it will be the service provider’s responsibility to ensure state-of-the-art technology is being sourced. A well-placed BPO service provider can help a company to focus on selling and growing their business while they look after the social media elements, providing the infrastructure, processes, technology and intelligence to interpret customer data analytics and to respond accordingly.

The game has started. And if companies don’t want to be left watching from the sidelines, it’s time to pick up the ball and start optimising the opportunities of social media.